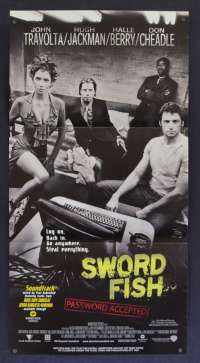 Swordfish is a 2001 American action crime thriller film directed by Dominic Sena and starring John Travolta, Hugh Jackman, Halle Berry, Don Cheadle and Vinnie Jones. The film centers on Stanley Jobson, an ex-con and computer hacker who is targeted for recruitment into a bank robbery conspiracy because of his formidable hacking skills. The film received a great deal of press initially because it featured Halle Berry's first topless scene. She was paid an extra $500,000 on top of her $2 million fee to appear topless in this film.