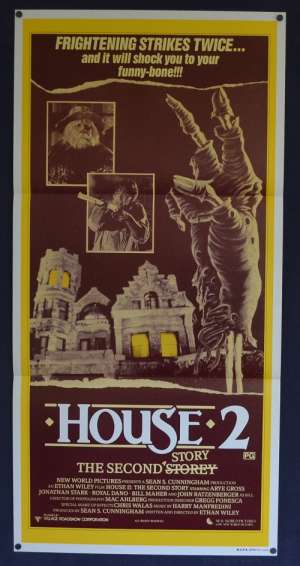 Original Australian Daybill movie poster. House 2. House II: The Second Story (also released as La Casa Di Helen or informally as La Casa 6) is a 1987 American comedy horror film and sequel to the 1986 film House. While a sequel, the film ignores the storyline and characters from the first film, in favour of a new supernatural comedy. The film's tone was much lighter than the original film. The film starred Arye Gross as Jesse and Jonathan Stark as Charlie. In October 1987, Marvel Comics released a comic book adaptation of House II. It was written by Ralph Macchio of Karate Kid fame.