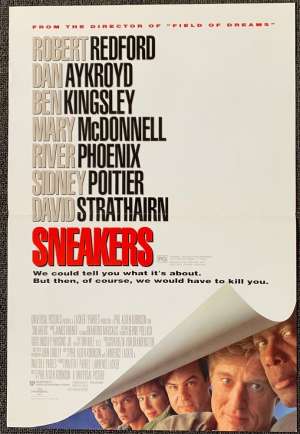 Mini-Daybill. Poster Sneakers is a 1992 American crime comedy directed by Phil Alden Robinson, written by Robinson, Walter Parkes, and Lawrence Lasker, and starring Robert Redford, Dan Aykroyd, Ben Kingsley, Mary McDonnell, River Phoenix, Sidney Poitier, and David Strathairn. Once Robert Redford was attached to the picture, his name was used to recruit other members of the cast and crew, including the director Robinson, who had little initial interest in the project but had always wanted to work with Redford. The film received positive reviews from critics upon its release and was a commercial success.