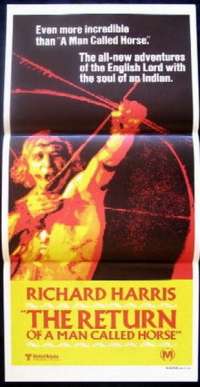 Original Australian Daybill movie poster.The Return of a Man Called Horse is a 1976 American western film directed by Irvin Kershner involving a conflict over territory between Sioux Indians and white men. It is the sequel to A Man Called Horse and it was followed by The Triumphs of a Man Called Horse in 1982.Richard Harris reprises his role as Horse, a British aristocrat who has become a member of a tribe of Lakota Sioux.