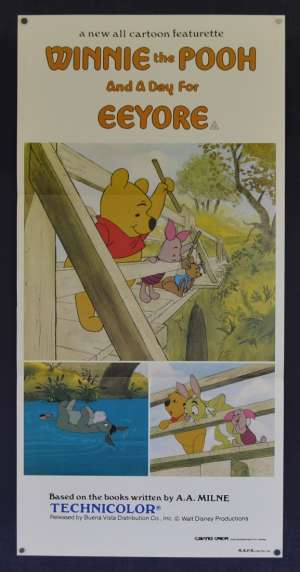 Original Daybill Poster Winnie The Pooh And A Day For Eeyore

Winnie the Pooh and a Day for Eeyore is a 1983 Disney Winnie the Pooh animated featurette, based on two chapters from the books Winnie-the-Pooh and The House at Pooh Corner, originally released theatrically on March 25, 1983, with the 1983 re-issue of The Sword in the Stone. It is the fourth and final of Disney's original theatrical featurettes adapted from the Pooh books by A. A. Milne. Produced by Rick Reinert Productions, this was the first Disney animated film since the 1938 Silly Symphonies short Merbabies to be produced by an outside studio. (The company had also previously produced the educational Disney short Winnie the Pooh Discovers the Seasons in 1981.)