Daybill Poster.Elvis The Movie is a 1979 American made-for-television biographical film directed by John Carpenter, and starring Kurt Russell as Elvis Presley, originally aired on ABC. Carpenter wanted to make the film because "I wanted to work with actors and I wanted to do a dramatic film. I wanted to do something different.” However Carpenter was not able to edit or score the film and found it an unhappy experience. Furthermore Carpenter says the film involved 150 locations and was shot over 30 days. "Some of the days we were moving to three and four different locations," he said. "When you have a big union crew with a lot of trucks and bullshit, you have to run very fast.” For Kurt Russell it marks the last role on television and the first collaboration between him and Carpenter. Russell worked with and met Elvis in the film ‘It Happened at the World's Fair (1963)’. Russell also dubbed the voice of a young Elvis in Forrest Gump (1994), and played an Elvis impersonator in the film 3000 Miles to Graceland (2001).After its success on television in the United States (It was nominated for a Golden Globe Award for Best Motion Picture Made for Television, and for three Primetime Emmy Awards, including Outstanding Lead Actor in a Miniseries or a Movie for Russell) , a shorter re-edited version of Elvis was released theatrically throughout Europe and Australia. 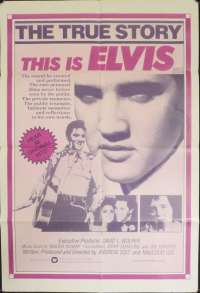