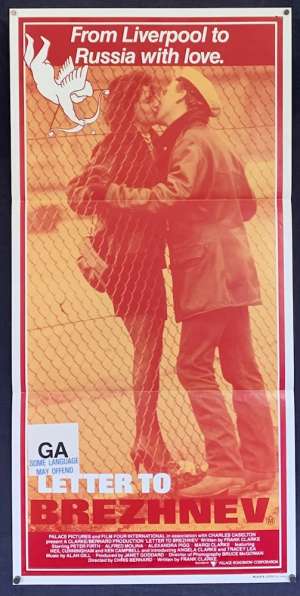 This  Australian Daybill was used in New Zealand for screening purposes hence the GA snipe that has been applied.Letter to Brezhnev is a 1985 British romantic comedy film about working class life in contemporary Liverpool. It was written by Frank Clarke and directed by Chris Bernard. It starred Alexandra Pigg, Margi Clarke, Alfred Molina, Peter Firth and Tracy Marshak-Nash (credited as Tracy Lea). Letter To Brezhnev presents Margaret Thatcher's high-unemployment Liverpool as a depressed and tough city, fallen on hard times. The film was shot in three weeks on a small budget with fees deferred to those involved. For the soundtrack for the film Sandie Shaw re-recorded the song "Always Something There to Remind Me". Also on the soundtrack was the Bronski Beat song "Hit That Perfect Beat" which was a hit in Australia and the UK. An early scene was filmed in the State Nightclub, a prominent Liverpool venue in the 1980s. The film was a critical success and assisted Liverpool in becoming the second most filmed city in the UK after London.