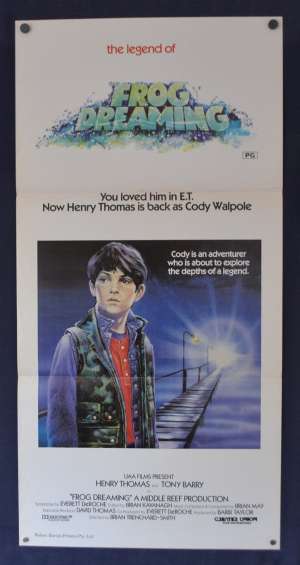 Rare Country Of Origin Daybill Poster. Frog Dreaming is a 1986 Australian family adventure film starring Henry Thomas, Rachel Friend (Neighbours TV Series), Tony Barry (The Mango Tree) and directed by Brian Trenchard-Smith (BMX Bandits). Scenes from the movie were filmed at the former quarry site of Moorooduc Quarry Flora and Fauna Reserve located in Mount Eliza, Victoria. The film goes under several alternate titles, including The Go-Kids in the UK, The Quest in the US, The Spirit Chaser in Germany, Fighting Spirits in Finland and The Mystery of the Dark Lake in Italy. At the Box office Frog Dreaming grossed $171,000 at the box office in Australia and critics commented "it is comparable to the likes of The Goonies, Flight of the Navigator, and The Monster Squad, Trenchard-Smith's film harkens back to a time before most kids' films weren't just computer-generated."