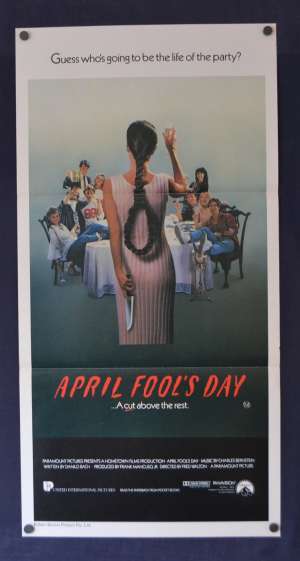 Daybill Poster. April Fool's Day is a 1986 American mystery slasher film directed by Fred Walton, produced by Frank Mancuso, Jr., and starring Deborah Foreman (Valley Girl) , Amy Steel (Friday The 13th Part 2), Ken Olandt, Deborah Goodrich, Thomas F. Wilson (Back To The Future Series), and Leah Pinsent. The plot follows a group of college students vacationing during April Fool's Day weekend on an island estate, which is infiltrated by an unknown assailant. Filmed in British Columbia in 1985, April Fool's Day was released in the spring of 1986 through Paramount Pictures in conjunction with the April 1 holiday. It received varied responses from film critics, with some commending it for its non-gratuitous violence and plot twists, while others lambasted it for its surprise ending.A remake of the same name was released direct-to-video in 2008. April Fool's Day was theatrically released in the United States on 1,202 screens and earned $3.4 million during its opening weekend, eventually grossing $13 million domestically. This ensured it was a commercial success.