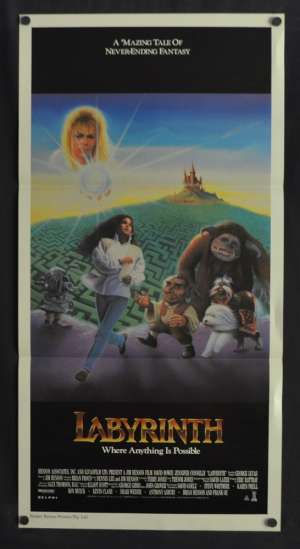 Daybill Poster artwork by Cliff Miller.Labyrinth is a 1986 musical fantasy film directed by Jim Henson, executive produced by George Lucas, and based upon conceptual designs by Brian Froud. It revolves around 15-year-old Sarah's (Jennifer Connelly) quest to reach the center of an enormous otherworldly maze to rescue her infant brother Toby, whom Sarah wished away to Jareth the Goblin King (David Bowie). Most of the film's significant characters, apart from Bowie and Connelly, are played by puppets produced by Jim Henson's Creature Shop.The film started as a collaboration between Henson and Froud following their previous collaboration The Dark Crystal. Terry Jones of Monty Python wrote the first draft of the film's script early in 1984, drawing on Froud's sketches for inspiration. Various other scriptwriters rewrote it and added to it. It was shot on location in Upper Nyack, Piermont, and Haverstraw, New York, and at Elstree Studios and West Wycombe Park in the United Kingdom. This was the last feature film that Henson directed. It was met with a mixed critical response upon its release, but it has since gained a large cult following.