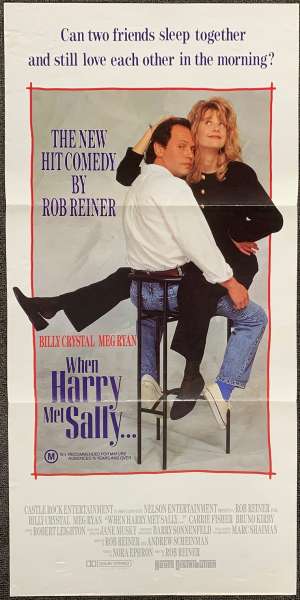 Daybill Poster.When Harry Met Sally... is a 1989 American romantic comedy film written by Nora Ephron and directed by Rob Reiner. It stars Billy Crystal as Harry and Meg Ryan as Sally. The story follows the title characters from the time they meet just before sharing a cross-country drive, through twelve years of chance encounters in New York City. The film raises the question "Can men and women ever just be friends?" and advances many ideas about relationships that became household concepts, such as "high-maintenance" and the "transitional person". The origins of the film were derived from Reiner's return to single life after a divorce. An interview Ephron conducted with Reiner provided the basis for Harry. Sally was based on Ephron and some of her friends. Ephron received a British Academy Film Award, an Oscar nomination, and a Writers Guild of America Award nomination for her screenplay. Rob Reiner initially envisioned actress Susan Dey for the role of Sally Albright. When she declined, he later considered Elizabeth Perkins. He also considered casting Elizabeth McGovern. Molly Ringwald was almost cast, but Meg Ryan convinced Reiner to give her the role. When Estelle Reiner died at age 94 in 2008, The New York Times referred to her as the woman "who delivered one of the most memorably funny lines in movie history" – I’ll have what she’s having’. This scene was shot again and again and Ryan had to demonstrate her fake orgasms for hours.