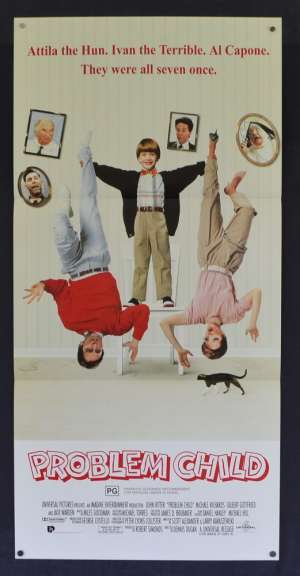 Problem Child is a 1990 American comedy film directed by Dennis Dugan and produced by Robert Simonds. It stars John Ritter, Michael Oliver, Amy Yasbeck, Gilbert Gottfried, Jack Warden, and Michael Richards. The story line went as follows: Ben (John Ritter) is a good-hearted guy who's always wanted a son of his own, but so far he and his wife have had no success. The couple adopt Junior (Michael Oliver), a redheaded hellion who quickly makes their lives miserable. Dan Aykroyd, Chevy Chase, Richard Dreyfuss, Steve Martin, Rick Moranis and Kurt Russell were considered for the role of Ben before it was turned over to John Ritter. The part of Martin "The Bow-Tie Killer" Beck was originally offered to Christopher Lloyd, who turned it down because of his commitments with Back to the Future Part III, released two months before Problem Child. A then-unknown child actor Macaulay Culkin reportedly auditioned for Junior before the role was taken by Michael Oliver. The film debuted at third place and went on to be a commercial success at the box office, grossing $54 million domestically and $72 million worldwide.