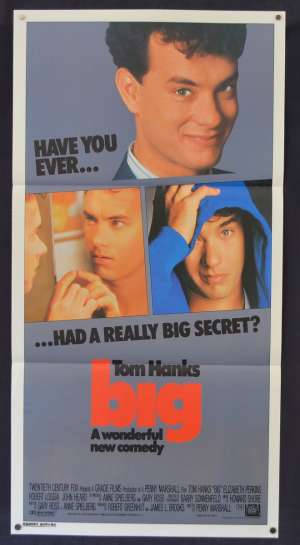 Big is a 1988 American fantasy comedy film directed by Penny Marshall, and stars Tom Hanks as Josh Baskin, a young boy who makes a wish "to be big" and is then aged to adulthood overnight. The film also stars Elizabeth Perkins, David Moscow as small Josh, John Heard, and Robert Loggia, and was written by Gary Ross and Anne Spielberg. The film was received with almost unanimous critical acclaim. The film was nominated for Academy Awards for Best Actor in a Leading Role (Hanks) and Academy Award for Best Original Screenplay. The Italian film Da Grande (1987) has been said to be the inspiration for Big. The film opened #2 with $8.2 million its first weekend. It would end up grossing over $151 million ($116 million USA, $36 million international).It was the first feature film directed by a woman to gross over $100 million.