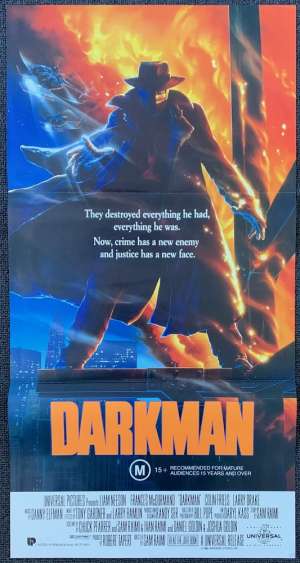 Daybill Poster.Darkman is a 1990 American superhero film directed and co-written by Sam Raimi. It is based on a short story Raimi wrote that paid homage to Universal's horror films of the 1930s. The film stars Liam Neeson as Peyton Westlake (Gary Oldman and Bill Paxton were also considered before Liam Neeson was cast), a scientist who is attacked and left for dead by a ruthless mobster, Robert Durant (Larry Drake), after his girlfriend, an attorney (Frances McDormand - Demi Moore, Bridget Fonda and Julia Roberts were all considered prior to McDormand), runs afoul of a corrupt developer (Colin Friels). Unable to secure the rights to either The Shadow or Batman, Raimi decided to create his own superhero and struck a deal with Universal Studios to make his first Hollywood studio film. The design and creation of the makeup effects required to turn Liam Neeson into Darkman were the handiwork of makeup effects artist Tony Gardner, who also cameos in the film as the Lizard Man in the carnival Freak Show sequence. Darkman was generally well received by critics and performed well at the box office, grossing almost $49 million worldwide, well above its $16 million budget.Darkman is now regarded as a cult film. Bruce Campbell (Evil Dead Films) has a cameo in the film as Peyton's last seen disguise.