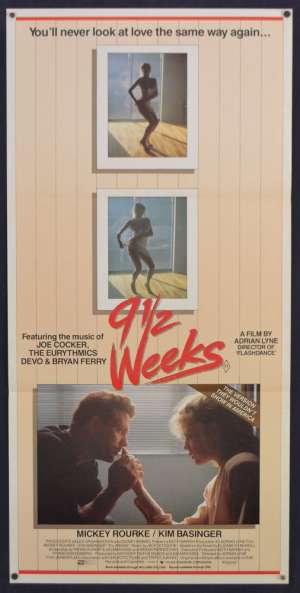 9 1⁄2 Weeks (originally titled Nine ​1⁄2 Weeks) is a 1986 American erotic romantic drama film directed by Adrian Lyne (Flashdance) with a screenplay by Sarah Kernochan, Zalman King, and Patricia Louisanna Knop. The film is based on the 1978 memoir of the same name by Austrian-American author Ingeborg Day. It stars Kim Basinger as Elizabeth McGraw and Mickey Rourke as John Gray. McGraw is a New York City art gallery employee who has a brief yet intense affair with a mysterious Wall Street broker. The film was completed in 1984, but not released until February 1986. Considered too explicit by its American distributor, and cut for U.S. release, the film was a box office bomb in the U.S., grossing only $6.7 million at the box office on a $17 million budget. It also received mixed reviews at the time of its release. However, it became a huge success internationally in its unedited version, particularly in Australia, Canada, France, Germany, and the United Kingdom, making $100 million worldwide. It has also acquired a large fan base on video and DVD and has developed a cult following.