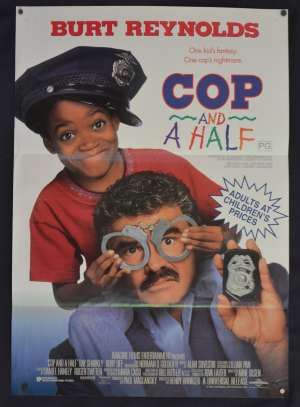 Original Australian Mini-Daybill Poster Cop And A Half

Cop and a Half is a 1993 American family buddy cop-comedy film directed by Henry Winkler, and stars Burt Reynolds, Norman D. Golden II, and Ray Sharkey in his final role. Reynolds plays a veteran cop who reluctantly takes an eight-year-old child (Golden) as his partner to solve a murder investigation. The film debuted at No.1 and grossed a total of $31.9 million in the US and another $8.8 in other territories for worldwide total of $40.7 million. Well known Critic - Roger Ebert gave it 3 stars out of a possible 4, saying, "There isn't much that's original in Cop and a Half, but there's a lot that's entertaining, and there's a winning performance by a young man with a big name, Norman D. Golden II.” With the passing of Burt Reynolds, any memorabilia of his is becoming collectible.