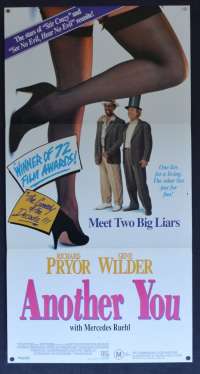 Another You is a 1991 American comedy film directed by Maurice Phillips. It was the final film featuring the pairing of Richard Pryor and Gene Wilder, as well as Wilder's final film appearance before his death in 2016. Co-stars included Mercedes Ruehl, Vanessa Williams, and Kevin Pollak. The film was released four years after Pryor revealed that he had been diagnosed with multiple sclerosis, and his physical deterioration is evident in this film. Peter Bogdanovich was the original director, but he was replaced after five weeks of shooting in New York. The film was shot instead in Los Angeles. None of Bogdanovich's footage was used.