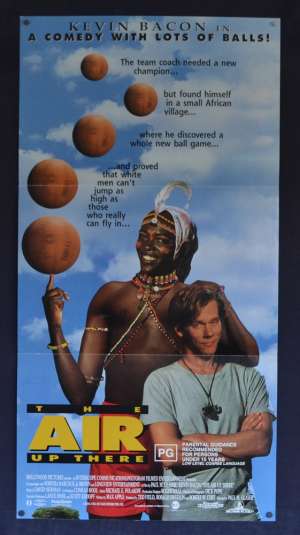 Original Australian Daybill Poster The Air Up There

Daybill Poster. The Air Up There is a 1994 American comedy film directed by Paul Michael Glaser and starring Kevin Bacon and Charles Gitonga Maina with Yolanda Vazquez as Sister Susan. Storyline for the film was as follows: Jimmy Dolan is a college basketball coach who wants a big promotion. To get it, he needs to make a dramatic find. He ends up deep in Africa, hoping to recruit Saleh, a huge basketball prodigy Jimmy glimpsed in a home movie. But Saleh is the chief's son and has responsibilities at home, since the tribe's land is threatened by a mining company with its own hotshot basketball team. For scenes taking place in the United States, the film was shot in Toronto and Hamilton, Ontario and Canada. Copps Coliseum stood in for the University's arena. Scenes in Africa were shot in Kenya and Hoedspruit and South Africa.