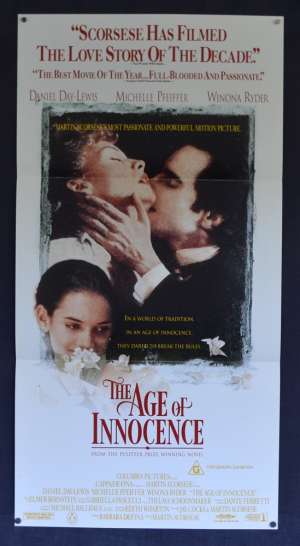 Daybill Poster. The Age of Innocence is a 1993 American romantic period film directed by Martin Scorsese. The screenplay, an adaptation of the 1920 novel of the same name by Edith Wharton, was written by Scorsese and Jay Cocks. The film stars Daniel Day-Lewis, Michelle Pfeiffer, Winona Ryder, and Miriam Margolyes, and was released by Columbia Pictures. The Age of Innocence won the Academy Award for Best Costume Design, and was nominated for Academy Awards for Best Actress in a Supporting Role (Winona Ryder), Best Adapted Screenplay, Best Original Score and Best Art Direction. Scorsese dedicated the film to his father, Luciano Charles Scorsese, who had died the month before the film was released. Luciano and his wife, Catherine Scorsese, had a small cameo appearance in the film.