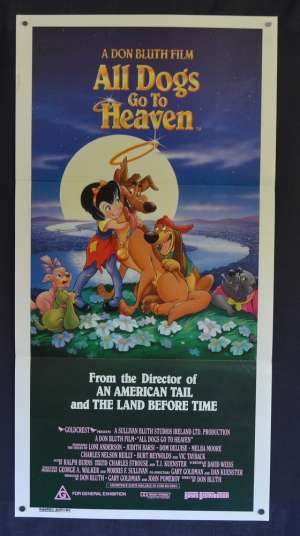 All Dogs Go to Heaven is a 1989 animated musical fantasy comedy-drama film directed and produced by Don Bluth, and released by United Artists and Goldcrest Films. It tells the story of Charlie B. Barkin (voiced by Burt Reynolds), a German Shepherd that is murdered by his former friend, Carface (voiced by Vic Tayback, in his penultimate film role), but withdraws from his place in Heaven to return to Earth, where his best friend, Itchy Itchiford (voiced by Dom DeLuise) still lives, and they team up with a young orphan girl named Anne-Marie (voiced by Judith Barsi, in her final film role), who teaches them an important lesson about kindness, friendship and love. While it did not repeat the box-office success of Sullivan Bluth's previous feature films, An American Tail, and The Land Before Time, it was successful on home video, becoming one of the biggest-selling VHS releases ever.