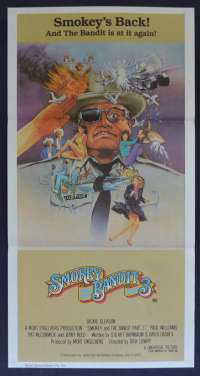 Smokey and the Bandit Part 3 is a 1983 American action comedy film and a sequel to Smokey and the Bandit (1977) and Smokey and the Bandit II (1980), starring Jackie Gleason, Jerry Reed, Paul Williams, Pat McCormick, Mike Henry and Colleen Camp. The film also includes a cameo near the film's end by the original Bandit, Burt Reynolds. The film was originally entitled Smokey IS the Bandit, and did not include Jerry Reed in the cast. However poor test screenings required them to do a re-shoot and re-work introducing Jerry Reed as the Bandit. Great poster art by artist Daniel Goozee.