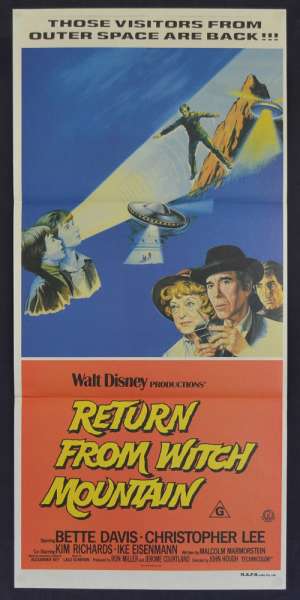 Return from Witch Mountain is a 1978 American science fiction–adventure film and a sequel to Escape to Witch Mountain (1975) and the second film in the Witch Mountain franchise. It was produced by Walt Disney Productions. It was written by Malcolm Marmorstein and is based on the novel by Alexander Key. Ike Eisenmann, Kim Richards, and Denver Pyle reprise their roles as Tony, Tia, and Uncle Bené—humanoid extra-terrestrials with special powers including telepathy and telekinesis. The two main villains are played by Bette Davis as Letha Wedge, a greedy woman using the last of her money to finance the scientific experiments of Dr. Victor Gannon, played by Christopher Lee.In September 1978, the film was re-released to theaters on a double bill with Escape to Witch Mountain. A television film sequel called Beyond Witch Mountain was made in 1982.