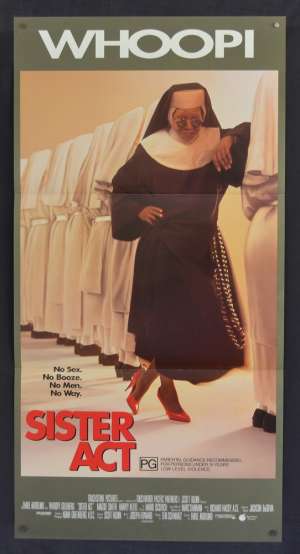 Sister Act is a 1992 American musical comedy film directed by Emile Ardolino and written by Joseph Howard. Featuring musical arrangements by Marc Shaiman, the film stars Whoopi Goldberg as a Reno lounge singer who has been put under protective custody in a San Francisco convent of Poor Clares and has to pretend to be a nun when a mob boss puts her on his hit list. Also in the cast are Maggie Smith, Kathy Najimy, Wendy Makkena, Mary Wickes, and Harvey Keitel. One of the most financially successful comedies of the early 1990s, grossing $231 million worldwide, the film was rated #83 on Bravo's The 100 Funniest Movies list. Receiving two Golden Globe nominations it went on to spawn a 1993 sequel, entitled Sister Act 2: Back in the Habit.