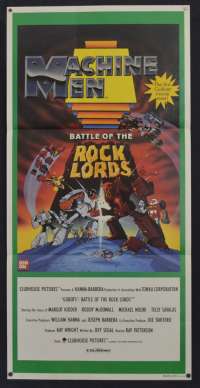 GoBots: Battle of the Rock Lords is a 1986 American animated film based on the Gobots toy franchise (released in Australia as Machine Men: Battle of the Rock Lords). It was produced by Hanna-Barbera Productions (also responsible for the Challenge of the GoBots television series) and released to theatres in 1986 by Clubhouse Pictures, the last film the company released. It featured the first appearance of the Rock Lords, who were given their own toyline after the movie. These new characters featured the guest voices of Margot Kidder, Telly Savalas and Roddy McDowall. Shown in only Independent cinemas, it had limited runs but enjoys a cult following now.