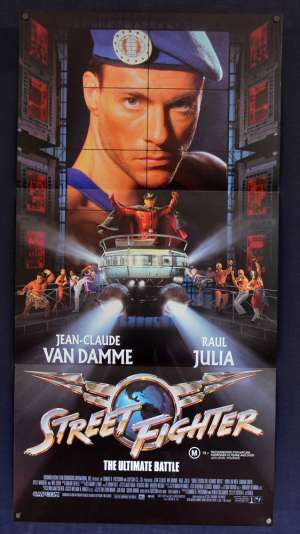 Daybill Poster.Street Fighter is a 1994 Japanese-American action film written and directed by Steven E. de Souza. It is based loosely on the video game Street Fighter II, produced by Capcom, and stars Jean-Claude Van Damme, and Raúl Juliá, along with supporting performances by Byron Mann, Damian Chapa, Kylie Minogue, Ming-Na Wen and Wes Studi. Street Fighter was filmed mostly in Queensland, Australia along the famous Gold Coast during the second and third quarters of 1994 with most of the interiors and exteriors filmed on soundstages in Brisbane. The film was a commercial success, making approximately three times its production costs. Raúl Juliá's performance as General M. Bison was widely praised and garnered him a nomination for Best Supporting Actor at the Saturn Awards. This was Julia's final posthumous theatrical performance as he died two months before the film's release due to Stomach Cancer.The film is dedicated to his memory.