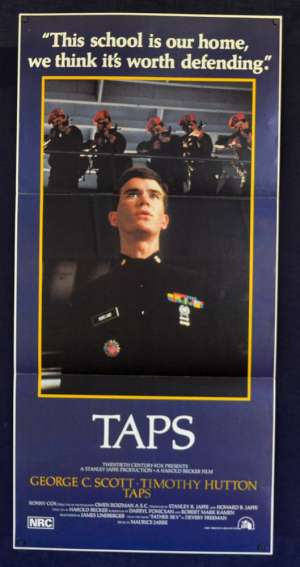 Daybill Poster.Taps is a 1981 American drama film starring George C. Scott and Timothy Hutton, with Ronny Cox, Tom Cruise, Sean Penn and Evan Handler in supporting roles. Hutton was nominated for a Golden Globe award in 1982. The film was directed by Harold Becker and the original music score was composed by Maurice Jarre. The film follows a group of military school students who decide to take over their school in order to save it from closing. This was Tom Cruise's second film role, following a brief appearance in Endless Love, released in 1981 just a few months before Taps.