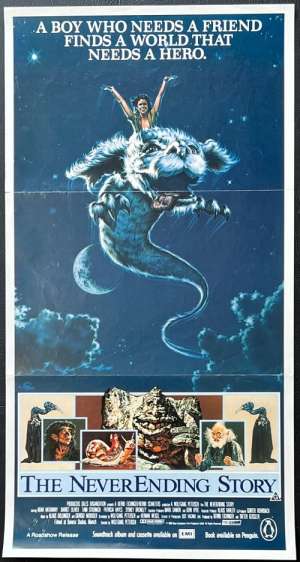 Daybill Poster art by Richard Hescox.The NeverEnding Story was the first film adaptation of the novel. It was released in 1984, directed by Wolfgang Petersen and starring Barret Oliver as Bastian, Noah Hathaway as Atreyu, and Tami Stronach as the Childlike Empress. It covered only the first half of the book, ending at the point where Bastian enters Fantasia (Fantastica). Ende, who was reportedly "revolted" by the film, requested they halt production or change the film's name, as he felt it had ultimately and drastically deviated from his novel; when they did neither, he sued them and subsequently lost the case.The music was composed by Klaus Doldinger. Some electronic tracks by Giorgio Moroder were added to the US version of the film, as well as the title song Never Ending Story composed by Giorgio Moroder and Keith Forsey becoming a chart success for Limahl, the former singer of Kajagoogoo. The film has spawned two sequels and is still favourite amongst old and young audiences.