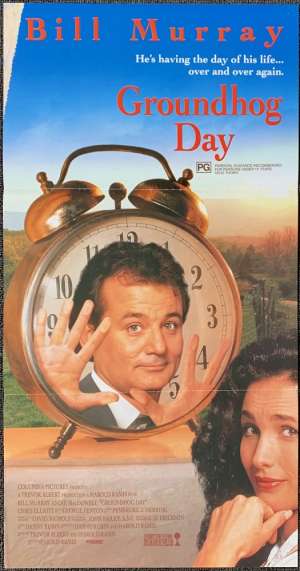 Rare Daybill Poster.Groundhog Day is a 1993 American fantasy-comedy film directed by Harold Ramis, starring Bill Murray, Andie MacDowell, and Chris Elliott. It was written by Ramis and Danny Rubin, based on a story by Rubin. On its release, Groundhog Day was a modest success and garnered generally positive reviews. It gained stronger appreciation among critics and film historians over time, and is now often listed among the best comedy films ever. It further entered into the public consciousness, where the term "Groundhog Day" can represent a situation that seems to repeat over and over in government and military arenas, as well as influencing other entertainment.