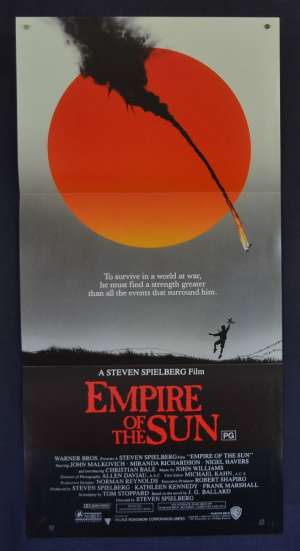 Empire Of The Sun is a 1987 American epic coming-of-age war film based on J. G. Ballard's semi-autobiographical novel of the same name. Steven Spielberg directed the film, which stars Christian Bale, John Malkovich, Miranda Richardson, and Nigel Havers. Harold Becker and David Lean were originally to direct before Spielberg came on board, initially as a producer for Lean. Spielberg was attracted to directing the film because of a personal connection to Lean's films and World War II topics. He considers it to be his most profound work on "the loss of innocence" and received critical acclaim. Excellent John Alvin poster artwork.