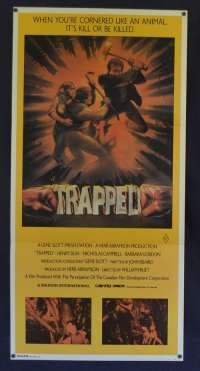 Also known as Baker County, U.S.A. and Killer Instinct, this film is a 1982 Canadian-American thriller-horror film directed by William Fruet and starring Henry Silva. It is about a group of college students who witness a redneck murdering his wife's lover. They then become his target.The film was made at the height of Canadian tax-shelter film-making, which generated such filmmakers as David Cronenberg, 'Trapped' is another of the country’s Deliverance-inspired revenge films after the excellent 'Rituals'.