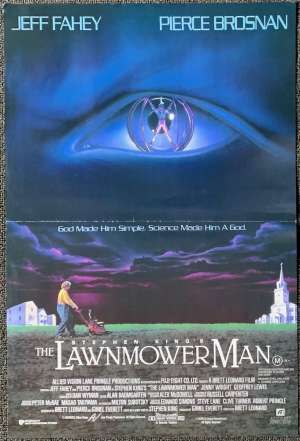 Mini Daybill Poster.The Lawnmower Man is a 1992 American science fiction action horror film directed by Brett Leonard and written by Brett Leonard and Gimel Everett. The film is named after a Stephen King short story of the same name, but aside from a single scene, the stories are unrelated. The film stars Jeff Fahey as Jobe Smith, a simple-minded gardener, and Pierce Brosnan as Dr. Lawrence Angelo, the scientist who decides to experiment on him.The film was originally titled Stephen King's The Lawnmower Man, but King successfully sued the producers for attaching his name to the film and stated in court documents that the film "bore no meaningful resemblance" to his story. An earlier short film, also titled "The Lawnmower Man", is a more faithful adaptation of the short story and was directed by Jim Gonis in 1987.