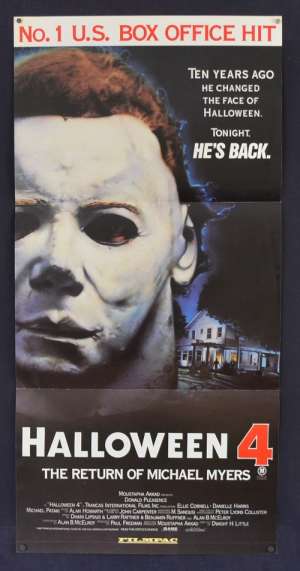 Daybill Poster.Halloween 4 The Return of Michael Myers is a 1988 horror film directed by Dwight H. Little and written by Alan B. McElroy. It is the fourth instalment of the Halloween film series and focuses on Michael Myers returning home to kill his niece Jamie Lloyd (Danielle Harris), the daughter of Laurie Strode, with Dr. Loomis (Donald Pleasence) once more pursuing him. As the title suggests, this film marks the return of Michael Myers after being absent in the previous instalment, Halloween III: Season of the Witch. Initially, John Carpenter and co-producer Debra Hill retired the Michael Myers storyline after the second instalment of the series, intending to feature a new Halloween-season-related plot every sequel, of which Halloween III would be the first. Halloween 4 was originally intended to be a ghost story however, due to the disappointing financial performance of the third film, Halloween 4 reintroduced Michael Myers.