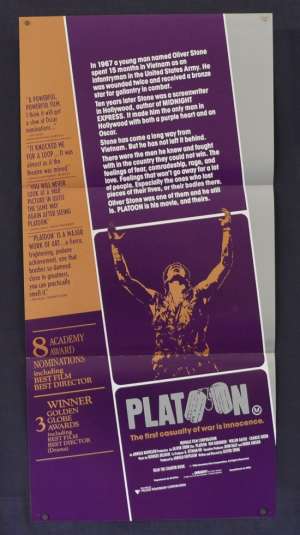 Daybill Poster.Platoon is a 1986 American war film written and directed by Oliver Stone and starring Tom Berenger, Willem Dafoe, and Charlie Sheen. It is the first film of a trilogy of Vietnam War films directed by Stone, followed by Born on the Fourth of July (1989) and Heaven & Earth (1993). Stone wrote the screenplay based upon his experiences as a U.S. infantryman in Vietnam, to counter the vision of the war portrayed in John Wayne's The Green Berets. Platoon was the first Hollywood film to be written and directed by a veteran of the Vietnam War. Platoon won the Academy Award for Best Picture of 1986; it also won Best Director for Oliver Stone, as well as Best Sound Mixing and Best Film Editing. Johnny Depp also makes an early film appearance.