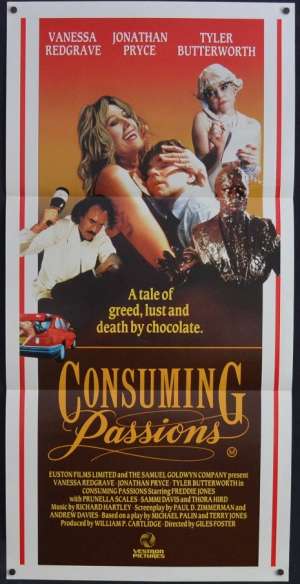 Rare Original Australian Daybill movie poster. Consuming Passions is a 1988 black comedy film which stars Vanessa Redgrave, Jonathan Pryce, and Sammi Davis and was directed by Giles Foster. The film is based on 'Secrets' by Michael Palin and Terry Jones which was broadcast by the BBC as a television play in 1973. It is about a chocolate factory that begins producing popular chocolates which contain human flesh. Also starring in the film were Andrew Sachs and Prunella Scales who both starred in Fawlty Towers.