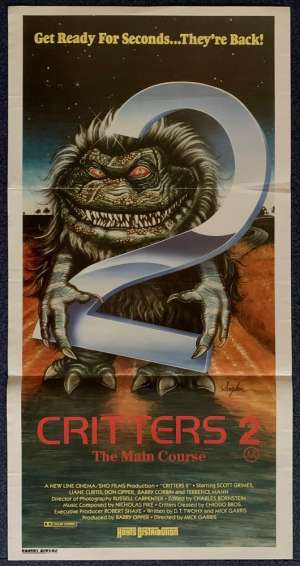 Daybill Poster art by Soyka.Critters 2: The Main Course (also known simply as Critters 2) is a 1988 American science fiction horror comedy film starring Terrence Mann, Don Keith Opper, and Scott Grimes. It was directed by Mick Garris and written by David Twohy and Garris. It is the second film in the Critters series and is the sequel to the 1986 film Critters and was the first feature directed by Garris. Garris got the chance to direct after having worked for Steven Spielberg on the TV series Amazing Stories as a screenwriter.