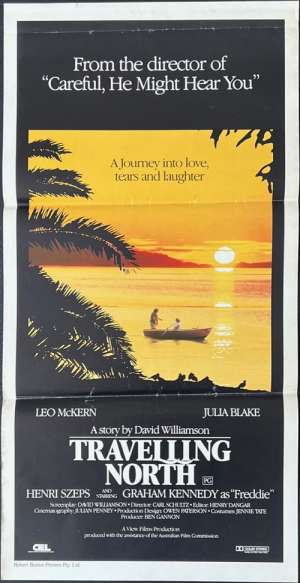 Travelling North is a 1987 film directed by Carl Schultz based on an original 1979 play of the same name by David Williamson. The film was not made until eight years later, with Williamson adapting his own play into a script. It is one of Williamson's favourite movies based on his works. The storyline is essentially about an aged couple who decide to move from Melbourne to north Queensland. At the AFI Awards the film won the categories Best Actor in a Lead Role (Leo McKern) and Best Adapted Screenplay (David Williamson). Julia Blake was nominated. The film also starred Gtaham Kennedy and Henri Szeps.Montréal World Film Festival awarded the Best Actor award to Leo McKern.