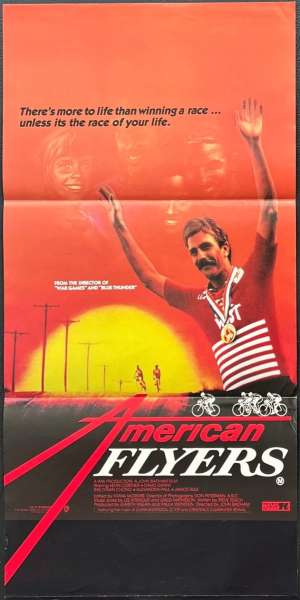 American Flyers is a 1985 American sports drama film starring Kevin Costner, David Marshall Grant, Rae Dawn Chong, Alexandra Paul, Jennifer Grey, Luca Bercovici and Janice Rule about bicycle racing. It was directed by John Badham and written by Steve Tesich (who had previously won an Oscar for Best Original Screenplay for another film featuring a bicycle race, 1979's Breaking Away). The film was released before Costner became a Hollywood superstar and was reviewed favourably overall.The 7-Eleven team that is featured in the movie was a real life team that competed in the Tour de France and Giro d'Italia in the '80s. The team was later sponsored by Motorola. Much of the race action was filmed at the Coors Classic, a now-defunct stage race that was one of the world's leading cycling events at the time of the film.