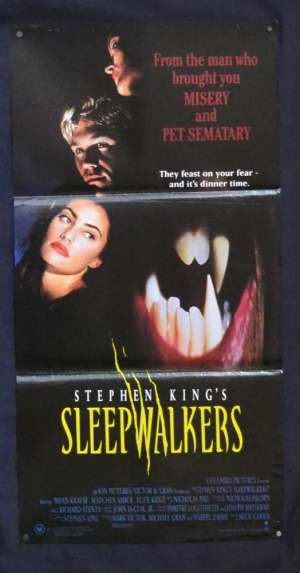 Very rare original Australian Daybill movie poster. Sleepwalkers (also known as Stephen King's Sleepwalkers) is a 1992 American horror film based on an original screenplay by Stephen King and directed by Mick Garris. The storyline is as such:Charles Brady and his mother, Mary, are the last of a dying breed whose needs are not of this world. They are Sleepwalkers - able to stay alive only by feeding on the life-force of the innocent, but destined to roam the earth, avoiding discovery while searching for their next victim. That search takes them to the sleepy little town of Travis, Indiana, where beautiful teenager Tanya Robertson is about to become an unwilling pawn in their nightmarish fight for survival.