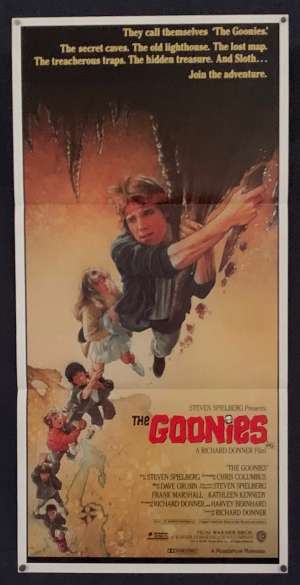 Daybill Poster with Drew Struzan artwork.The Goonies is a 1985 American adventure comedy film directed by Richard Donner. The screenplay was written by Chris Columbus from a story by executive producer Steven Spielberg. The stars of the film included Sean Astin as Michael "Mikey" Walsh, Corey Feldman as Clark "Mouth" Devereaux, Ke Huy Quan as Richard "Data" Wang and Josh Brolin as Brandon "Brand" Walsh. The film's premise features a band of pre-teens who live in the "Goon Docks" neighborhood of Astoria, Oregon attempting to save their homes from demolition, and in doing so, discover an old Spanish map that leads them on an adventure to unearth the long-lost fortune of One-Eyed Willy, a legendary 17th-century pirate. The film grossed $61 million worldwide and has developed a cult following.