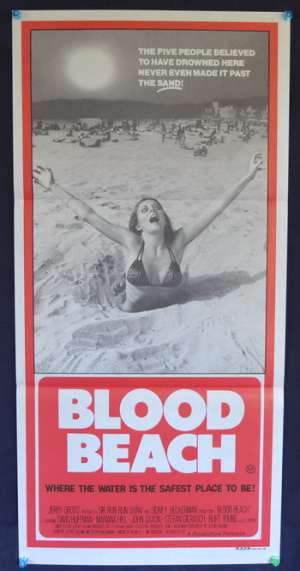 Daybill Poster. Blood Beach is a 1981 horror B movie written and directed by Jeffrey Bloom. It starred David Huffman, John Saxon and Burt Young. The premise, conceived by Steven Nalevansky, involved a creature lurking beneath the sand of Santa Monica Beach that attacks locals and vacationers. The film's tagline was: "Just when you thought it was safe to go back in the water... you can't get to it!". The film was given a limited theatrical release twice in the United States in 1981 and 1982.The film now enjoys a cult following in the B grade movie genre.