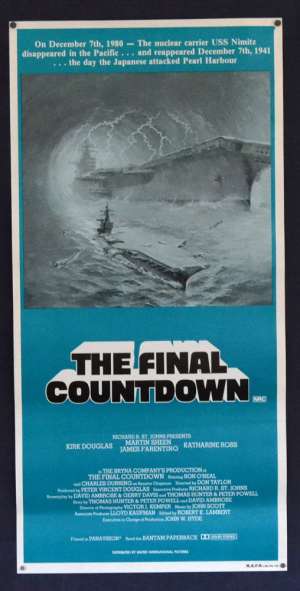 The Final Countdown is a 1980 alternate history science fiction film about a modern aircraft carrier that travels through time to the day before the 1941 attack on Pearl Harbor. Produced by Peter Vincent Douglas (Fletch) and directed by Don Taylor (Escape From The Planet Of The Apes), the film stars Kirk Douglas, Martin Sheen, James Farentino, Katharine Ross and Charles Durning. This was Taylor's final film. Produced with the full cooperation of the U.S. Navy, it was set and filmed on board the actual USS Nimitz supercarrier. Many of the crew members of the Nimitz were used as extras, a few with speaking parts; a total of 48 of the crew appear as "actors" in the final credits. 3 Mitsubishi A6M Zero replicas, originally built for the film Tora! Tora! Tora! (1970), were flown in the film of which two were featured in a dogfight with F-14 Tomcats. Awards wise it was a Nominee - Best Science Fiction Film of the Year—Saturn Award (Peter Vincent Douglas), Nominee Best Actor—Saturn Award (Kirk Douglas) and Winner Golden Screen Award (German box office award).